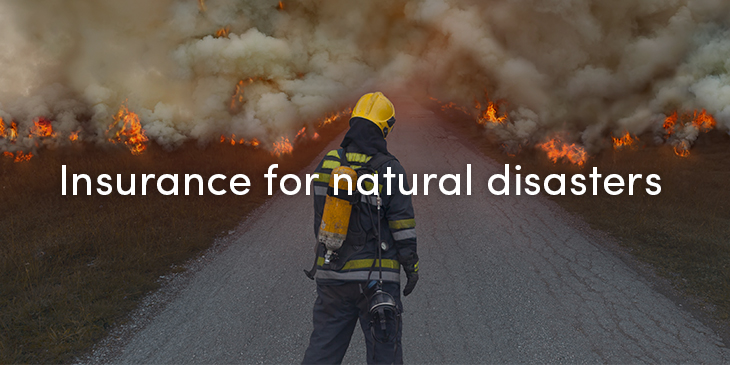 With residents of Townsville dealing with unprecedented flooding and large tracts of Tasmania on fire, the impacts and ramifications of natural disasters serve as a reminder how prone many parts of Australia are to events like bushfires, floods and cyclones.

These events impact the lives of local people in many ways, not least through the tragic loss of life and property, as well as the long-term effect on livelihoods. Areas that persistently experience destructive natural events, like North Queensland, have also become uninsurable as insurers struggle to cope with the scale of claims.

Counting the cost of cyclone, flood and fire

The insurance industry is all too aware of the real cost of natural disasters, after footing the bill for claims for cyclones Yasi (2011) and Debbie (2017), with each event accounting for claims in the region of $1.5 billion.

The Queensland flood of 2010/111 cost insurers some $2.4 billion, while the insurance bill from the recent Townsville flooding is projected to reach the $1 billion mark. The Tasmanian Government is still assessing the cost of the 2019 fires, with the final figure likely to be in the tens of millions of dollars.

Scientists and insurers alike are also beginning to question if climate-driven natural disasters could end up making insurance too expensive for some areas. In many instances, the reconstruction bill is so large that the government becomes the insurer of last resort.

The Queensland flood levy is a case in point, where a temporary national tax was introduced to help fund the rebuilding of essential infrastructure. This has also prompted the Federal government to establish the Natural Disaster Relief and Recovery Arrangements (NDRRA), which provides financial assistance to disaster-affected communities.

The National Disaster Insurance Review (NDIR) was also set up in the wake of the 2011 floods, after consumer concerns arose regarding the availability of flood insurance. The review found that there were inconsistent definitions of flood events in policies and consumers’ lack of understanding about the fact or consequences of the exclusions.

More recently this has prompted the Australian Competition and Consumer Commission (ACCC) to investigate the industry in northern Australia, where premiums have skyrocketed over the last decade.

When it comes to evaluating a policy consumer, we first need to identify if flood cover is included, and what the constitutes a flood event under the policy wording. Similarly, a home may be covered for a house fire, but does the policy specifically cover a bushfire event?

Getting into the fine detail of the wording is crucial as most policies include cover for “storm,” “rainwater” and “run-off,” but the exact definition of these terms depends on your policy wording. Even if a policy excludes flood damage, the consumer may still be covered if the source is from a storm or rainwater damage.

Some insurers exclude flood cover while others treat it as an optional extra at an additional cost. There is also a trend for flood cover as a standard inclusion.

Before purchasing cover consumers should look to clarify:

The bottom line is that you should check the definitions in your insurance contract, specifically the Certificate of Insurance and PDS. Your broker can help, answering your questions and (if necessary) translating your policy into everyday English. It pays to ensure you’re covered for any eventuality, so call your broker today.